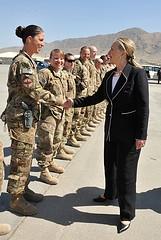 Branding’s Winners and Losers, from Ms. Clinton and Madonna to Monica and Mitt

Some people have the brand elasticity to not just survive crises but also transcend them, rising up out of the proverbial ashes newly empowered and invigorated, remaining in the spotlight because they want to be there. Whereas others simply can’t seem to bounce back, no matter how hard they try to reinvent themselves. Are some people born winners and others less likely to rise when the going gets gritty?

Consider Hillary Clinton, who went from headband-mocked presidential candidate’s wife to wronged first lady at her husband’s side after Monicagate to U.S. senator to serious contender for president (and way-paver for the female president we’ll likely see soon—maybe Hillary herself) to effective and well-regarded secretary of state whose statement of responsibility for a deadly attack in Benghazi has been hailed as a rare example of effective discourse and diplomacy during a spectacularly uncivil campaign season.

Meanwhile, Monica Lewinsky—whose role in the scandal was admittedly less innocent than Hillary’s but who deserves some sympathy for being a young girl seduced by the most powerful man on the planet—can’t seem to regain her footing, no matter how much she pivots to new ventures and personal brands. After a few years of trying to define herself as aNew York handbag designer, she decamped to London, where she earned a degree at the London School of Economics and Political Science and has been trying to lie low, declining requests for interviews.

Speaking of England, Queen Elizabeth’s brand seems to be bulletproof. She has weathered some storms this year: attending her Diamond Jubilee alone when her husband, Prince Philip, was hospitalized; watching a son and a daughter-in-law get photographed in compromising circumstances. Through it all, she has held her head high and showed her ability to laugh—including at herself, as seen in her memorable entrance to the opening ceremonies of London’s Olympic Games. Likewise, Camilla has managed to rebrand herself by taking her lumps and sticking with it—with an assist from the queen, who invited her to meet in 2000.

Two other good examples are Madonna and Sean Penn, who struck some very low notes together but came out relatively unscathed and have, in fact, gone on to reinvent their brands in impressive ways. Madonna is proving that women don’t have expiration dates and can rock as hard and be as provocative at 50 as at 20. She remains the original chameleon, inspiring Lady Gaga and many others (including Britney Spears, who herself is back, with Simon Cowell as her biggest brand advocate). Penn, meanwhile, through genuine passion for helping Haiti, has rebranded himself as an effective, generous activist.

So how do these trends translate to the commercial sector? Reinvention winners share traits that can be applied to company or personal brands that could use some polishing:

And this week’s questions: After the billions spent, what will come of Mitt Romney? And how and where will David Petraeus and Paula Broadwell land? (Just between us chickens, it’s hard to imagine Broadwell as the next Monica Lewinsky.)