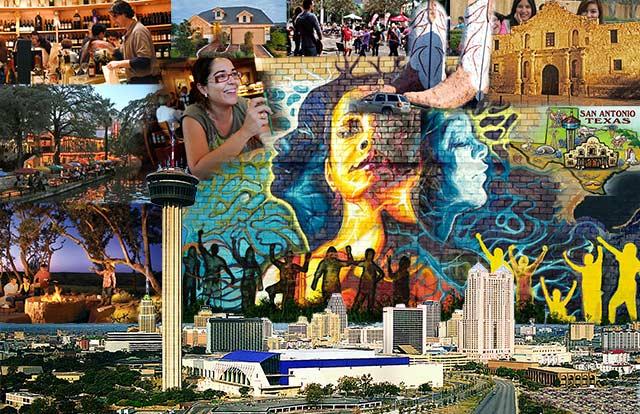 Why The Southwest Is The New Capital Of Influence

Everyone knows that the Southwest is warm this time of year, but today the region is hot. Its time has finally come. Millions of Hispanic-American families (whose ethnic/racial group makes up 17 percent of the U.S. population) are putting down roots there, and Latin millennials are putting Latin flair into its cities, places and spaces.

To get specific, the new American centers of gravity are California and Texas. It’s not simply because they have the two largest populations, with just over 38 million people in California and 26 million–plus in Texas. And it’s not because of Hollywood or Dallas, Silicon Valley or even the constantly trending #SXSW.

Those two states, as well as Arizona and New Mexico, are the new capitals of influence. They’re not just border states (although that’s an important factor); they’re also a frontier between the America that we were and the America we’re rapidly becoming. Some 52 million Americans today identify as Hispanic, and 50,000 of them will turn 18 each month for the next two decades. These millennials have real clout, both for their spending power now and for their ability to influence what comes next. Marketers especially should start paying attention.

We undertook a study of 804 Hispanic and non-Hispanic Americans ages 18 to 34 in Arizona, California, New Mexico and Texas earlier this year. Among other questions, we asked them which cities in the Southwest will be the best places for their generation. Their answers were illuminating and based on where they currently live, where they had gone to college or would like to go, the media, and their friends and families. (These were open-ended queries, by the way, so it’s not as if we supplied our list and asked them to prioritize their “where.”) We all need to be keeping an eye on these cities as we think about where #nextgen will flourish. (Three commonalities: They are ethnic, affordable and youthful, including college towns as one anchor.)

1. San Antonio. The city topping the list hits the appeal trifecta: a dynamic economy, employment opportunities and affordable living. Reasons cited for picking San Antonio ranged from “I think it would be a safe city to raise a family” to “It is expanding every day and providing new job opportunities, the atmosphere is great, and there are a lot of activities to do and festivities to join.”

2. San Diego. Many young millennials wish they could all be California girls and guys: Hispanics and non-Hispanics in our survey both gave San Diego high marks, thanks to its natural beauty and general lifestyle appeal. Their answers included “San Diego is a great place, with entertainment, restaurants, great weather and exciting adventures” and “People of my generation love being outdoors, and what better place than in San Diego?”

3. Los Angeles. The current hot cities aren’t all necessarily new. LA won a lot of votes because the city, which has 18 million inhabitants in its greater metro area, is already home to a lot of our respondents; others are drawn to it because it’s a world-famous talent magnet and a dynamo of activity. Their reasons: “That is where the people are and the energy of the generation. Anything can happen” and “It has lots of employment opportunities, entertainment and living there is simply super-fun.”

4. Phoenix. The Arizona capital (along with its neighbors like Scottsdale, Chandler and Tempe) was among the most popular choices for non-Hispanic millennials in our survey, and Hispanics admire it as well. They cited good weather, beautiful location and a thriving economy, singing the city’s praises like this: “It has the most amenities and jobs in the region. Other Southwestern cities … can never beat the beauty and thrill of Phoenix” and “Phoenix is growing; it has a good college scene and a good nightlife, and the government is revitalizing its downtown area, so it should be a good area in the Southwest.”

5. Austin. While Austin is home to @SXSW, the city’s appeal for millennials, especially the non-Hispanics we surveyed, goes deeper. It’s the most obvious candidate for the Southwestern city of the future and in sync with millennials’ liberal politics, life goals and tech savvy. Their reasoning ran along the lines of “I think Austin is more in tune with my generation’s thoughts. It’s a more open and laid-back environment” and “We’re seeing so many innovative ideas coming out of this city. The atmosphere and welcoming people are what make Austin so great.”

6. Albuquerque. Young people who know and love the Duke City made a heartfelt case for it, whether they currently live there or not, citing its vibe, just-big-enough size and cultural mix. A Mexican female living in Texas told us, “Albuquerque … [offers a] mesh of cultures and is influenced by a more unique Mexican culture,” and a Mexican male in New Mexico said, “It’s a big city with a lot of different people and culture and places like restaurants and movie theaters.” Others singled out the entertainment industry as part of the city’s appeal (and who didn’t love “Breaking Bad”?). “They are doing a lot of filming of television and movies in the area. I think it will be an alternative to Hollywood and create a ton of tourism,” said one Caucasian woman.

7. Dallas–Ft. Worth. This large metro area repeatedly cropped up in our survey as a place to consider for the future. Although it didn’t have the distinctively millennial or Hispanic elements of some of the other cities on this list, its appeal can be summarized in one word: opportunities. Our respondents said things like, “There are tons of job opportunities in the bigger cities. You have more changes. Sure, things might be more expensive, but it might be worth the risk.”

8. Houston. The fourth-largest city in the U.S., Houston is seen as a land of opportunity, diversity (with Asians and African-Americans as well as Hispanics) and general niceness. Southern manners and hospitality influence life there, making everything more pleasant. We got answers like this: “Houston, because it has very nice people, all sorts of variety of races, and good places to eat out and enjoy with your family.”

9. San Francisco. The millennials in our survey weren’t even glimmers in their parents’ eyes when the City by the Bay first became cool, but the epicenter of American tech holds a strong appeal. The city’s history of liberal politics and gay rights still resonates, too. “I love San Francisco because it’s cute and beautiful and fresh and gay just like me. I hope to live there someday,” said a Mexican male respondent living in California. Others were more practical: “It’s so liberal and technology-oriented. It’s next to Simi Valley, which is the center of entrepreneurship.”

10. Tucson. The University of Arizona put the state’s second city on the map and still plays a role in its young image. Tucson’s millennial reputation is as a city of the future—affordable and very ethnic and authentic. Our respondents gave us reasons such as “It seems like a young and vibrant town. It seems like it would have a lot of fun things to do” and “It has rich traditions, mixed with modern lifestyles. It has a low cost of living with all the available amenities.”

I have been flagging up the college towns of the Southwest as the place to watch for more than a year, but this research reinforces Austin Envy, the sacred college towns of Arizona, and especially a new version of “Go west, young men and women”—go west to places with strong public colleges and universities and awesome ethnic restaurants. Have you had Ethiopian food in Tucson? That is the future.