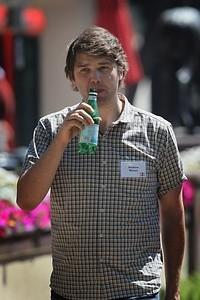 The Deal Is Off: What to Learn from the Fall of Groupon CEO Andrew Mason

Andrew Mason’s unsurprising ouster from Groupon last week wasn’t entirely about his personal brand. As anyone who has been paying attention knows, the group-discount company has been performing spectacularly badly. Its fourth-quarter earnings report was awful, with a GAAP loss of 12 cents per share—that’s 10 cents more (or six times as much) as Wall Street analysts had been predicting—for a net loss of $81 million. Groupon’s stock fell a whopping 24 percent after the beleaguered company posted its earnings report on Feb. 27. (But it bounced back by 10 percent after word got out of Mason’s departure, leading All Things D’s John Paczkowski to joke, “The company should consider firing Mason every day.”)

It might not have mattered how Mason behaved while presiding over a company that had a meteoric rise in 2008 and an even more dramatic fall since then, a company that also has been used as an example of a second hype-fueled tech boom. There were embarrassing accounting gaffes, and Groupon’s share price suffered a staggering 77 percent decline during Mason’s rocky tenure.

But the 32-year-old former CEO, who is reportedly worth more than $200 million, didn’t do himself, his company or his shareholders any favors with what Time’s Sam Gustin called his “sophomoric stunts” and “enfant terrible” personal brand. Trying to bring a new, exuberant millennial sensibility—one that’s unconstrained by usual business expectations—to Silicon Valley makes sense, but Mason pushed it too far.

Gustin wrote about how, after the SEC raised questions about Groupon’s pre-IPO accounting statements, “Mason also annoyed the SEC when he authored a lengthy, profanity-laden memo that was promptly leaked to the press in the middle of the company’s pre-IPO quiet period. In the memo, Mason touted Groupon’s prospects and trashed the financial press for critical coverage of the company.”

He went on to describe Mason’s “occasionally bizarre behavior,” such as the 2011 “death stare” episode, posted on All Things D by Peter Kafka. And the important meeting to discuss the company’s corporate strategy in April 2012, which a Wall Street Journal reporter viewed by webcast (all the more reason to be on your best adult behavior). When Mason’s voice broke and he explained it by saying, “Sorry, too much beer,” the reporter put that in the story.

That’s dubious personal branding for a fraternity president, let alone the CEO of a much-hyped tech company earning millions of dollars. He reportedly went on to tell employees that Groupon needed to grow up.

His stunts included taking a hosting gig at a Japanese restaurant, he said, “to understand what makes local merchants tick,” reported Bloomberg Businessweek. Though it’s unclear whether that taught him anything useful or just made his personal brand look more unfocused and unserious—more adolescent, in other words.

So it comes as little surprise that Groupon Executive Chairman Eric Lefkofsky told the Chicago Tribunethat Mason’s replacement would be an experienced grownup, someone presumably more capable of meeting the company’s challenges: He said he’s looking forward to hiring a CEO “who has experience dealing with the issues we’re dealing with … who has been there and done that.”

But while Mason’s personal brand ended up being too juvenile and irreverent during his rise and reign at the top of the company, those same attributes appear to have served him well during his abrupt fall.

In what is probably the second most famous resignation announcement in history (the first being Greg Smith’s infamous flame-out op-ed about the “toxic and destructive” Goldman Sachs in TheNew York Times last year), Mason was refreshingly candid about the reason he was leaving. He began his final memo to employees like this:

“After four and a half intense and wonderful years as CEO of Groupon, I’ve decided that I’d like to spend more time with my family. Just kidding—I was fired today. If you’re wondering why … you haven’t been paying attention. From controversial metrics in our S1 to our material weakness to two quarters of missing our own expectations and a stock price that’s hovering around one quarter of our listing price, the events of the last year and a half speak for themselves. As CEO, I am accountable.”

He did well to accept responsibility so candidly, and he was widely praised for being so direct about the “spending more time with my family” euphemism that no one believes anyway. And now that failure is in some ways seen as a badge of honor in Silicon Valley—better to fail than to play it too safe and not take any risks—he was wise to be honest later in the letter that he did fail.

I’m less convinced, though, about his choice of metaphor when he sought to reassure Groupon employees who might have been concerned about whether Mason would be OK. He wrote, “ If Groupon was Battletoads, it would be like I made it all the way to the Terra Tubes without dying on my first ever play through.”

An early-’90s video game? Probably not what you want to align your brand with in 2013.